At-Tafilah (Template:Lang-ar), also spelled Tafila, is a town with a population of 39,000 people in southern Jordan, located Template:Convert southwest of Amman. It is the capital of Tafilah Governorate. It is well known for having green gardens which contain olive and fig trees, and grape-vines. Tafilah was first built by the Edomites and was called Tophel.

There are more than 360 natural springs in the at-Tafilah area, including the natural reservoir of Dana and hot natural springs at Afra and Borbeata. There are two phosphate and cement mines in at-Tafilah which are one of the country's main income sources.

As with other parts of the Levant, signs of habitation in Tafilah Governorate have been found dating from the Palaeolithic periods.

ruins of Busaira, which was the Capital of the Kingdom of Edom 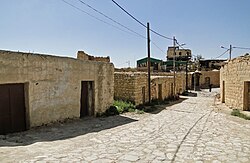 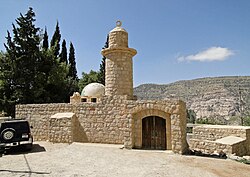 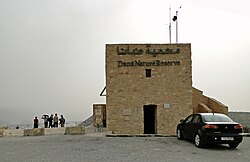 The Dana Nature Reserve in Tafilah

In 1984 a team of archeologists from the University of Arizona discovered stone tools estimated at 90,000 years old in caves in Ain Defla and Hessa. Although no human remains could ever be found dating from that era, the discoveries of prehistoric tools supplied scientists with much information about human civilization stages in the Levant

The oldest known civilization to establish a kingdom on Tafilah soils was that of Edom, and Tafilah lies on the ruins of the Edomite city of Tophel. The capital of Edom was at Busairah 23 km to the south of Tafilah. The Edomites often allied with their neighbors in Moab. Tafilah was then annexed to the Nabatean kingdom who had their capital in Petra. Following the Roman invasion, it was ruled by the Ghassanids, under Rome's authority.

Tafilah then came under Muslim rule, but was for a brief period of time under Crusader rule.

Role in Arab Revolt against Turkey (Battle of Tafileh) 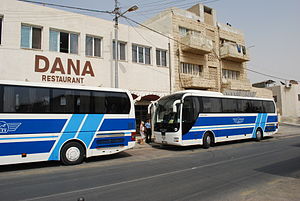 On January 25, 1918, Arab and Allied forces of the Arab Revolt under T.E. Lawrence and Prince Zeid bin Hussein destroyed a 900-strong Turkish force near Tafilah, which Lawrence referred to in his memoir Seven Pillars of Wisdom as "Tafileh".

The city of Tafilah is organized into six districts:

Although Tafilah Governorate is rich in history, having been the site of the ancient kingdom of Edom, it has one of the lowest numbers of tourists in Jordan. This is due to the fact that Tafilah is off the beaten track; Jordan's main highways do not pass through or nearby the city. The two main highways connecting north to south Jordan are the Dead Sea Highway (Highway 65) and the Desert Highway (Highway 15). To go to Tafilah from the Desert Highway, one must take Highway 60 west at Jurf Al Darawish.

The towns in Tafilah governorate are mostly located at elevations exceeding 1000m above sea level. In the year 2008 there was a total area of 42.210 km2 of fruit and olive farms in Tafilah Governorate of which more than 31 km2 were olive farms. In the tourism section, Tafilah depends mostly on domestic tourists who visit the hot water springs and the natural reserves in the governorate.
Retrieved from "http://wiki.ttu.edu.jo/index.php?title=Tafila&oldid=143"